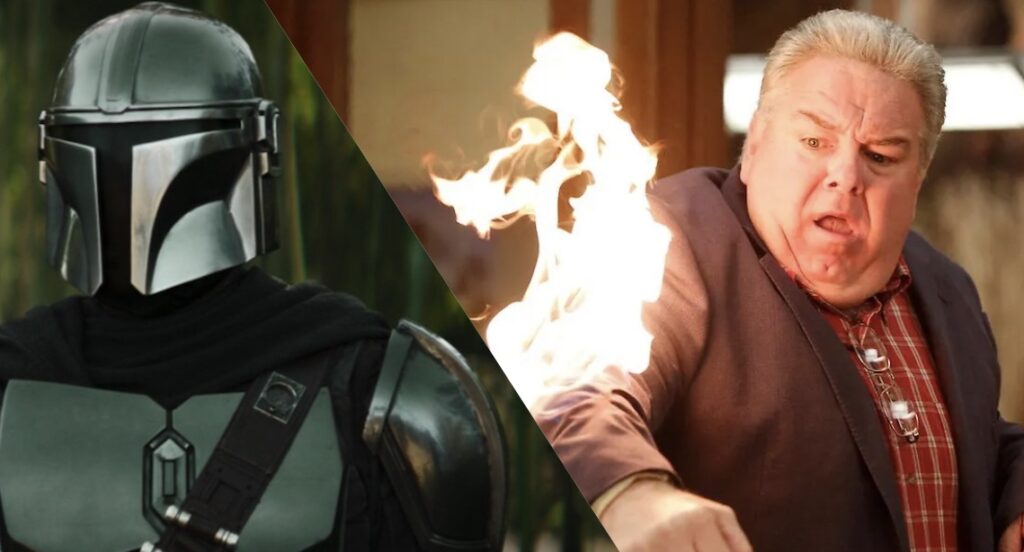 During a recently released episode of actor, Rob Lowe, and writer, Alan Yang’s Parks and Recollection podcast, Jim O’Heir appeared as a guest where the three reminisce on specific episodes of the series Parks and Recreation, the work O’Heir is probably best known for. Later in the episode the hosts ask Jim what he’s working on to which he responds, “Oh shoot. I don’t know if I’m allowed to say where I am. I can say a State. I’m in a state, New Mexico, I don’t know.” before host Lowe chimed in and said, “I will say, Jim, I know what you’re working on, and it rhymes with the latest instalment of Bar Wars.”

Currently The Mandalorian season three is still filming, and is scheduled to wrap later in March before Ahsoka begins filming towards the end of April. The Mandalorian typically films mostly in Los Angeles, at Manhattan Beach Studios, and at a train yard in El Segundo, so the move to New Mexico is unexpected. Currently to my knowledge, at the train yard over the last couple of weeks they’ve been shooting scenes with a ship and a campsite on a desert location, which I expect is likely connected to what they needed to film in New Mexico. There was also a large cave set located at the train yard before the campsite and ship were constructed, and that too looked like it was a sandy location.

You may remember that we previously reported in January that Bryce Dallas Howard had returned to direct for the third season of The Mandalorian, and yesterday the Jurassic World star posted a picture to her Instagram where she appeared to be at a sandy location and in director mode as she captioned the snap, “Love working on my birthday! There’s no place I’d rather be than on a set. I’m so moved by all the birthday wishes and deeply grateful for another year around the sun (properly shaded from the UV rays of course).”

As I previously mentioned, Jim O’Heir is probably best known for starring on the classic sitcom, Parks and Recreation as Jerry, but he’s also guest starred on a number of high profile series such as Brooklyn Nine-Nine, Veep, It’s Always Sunny in Philadelphia, and Curb Your Enthusiasm. So based on his track record you can probably assume his role will be quite comedic, which isn’t unusual for The Mandalorian considering the wealth of comedic talent that’s appeared in the show previously including Amy Sedaris, and Bill Burr.

The Mandalorian season three began filming in very late September at Manhattan Beach Studios, and is scheduled to wrap later this month. Currently The Mandalorian’s third season does not have a release date, or window, but is expected to release very late this year, or early next.

If you want to keep up to date with the latest leaks, news, reputable rumours, and my exclusive reports, be sure to sign up to my mailing list below, and if you’re a fan of my work and would like to show your appreciation, you can tip me on my Ko-Fi page here.