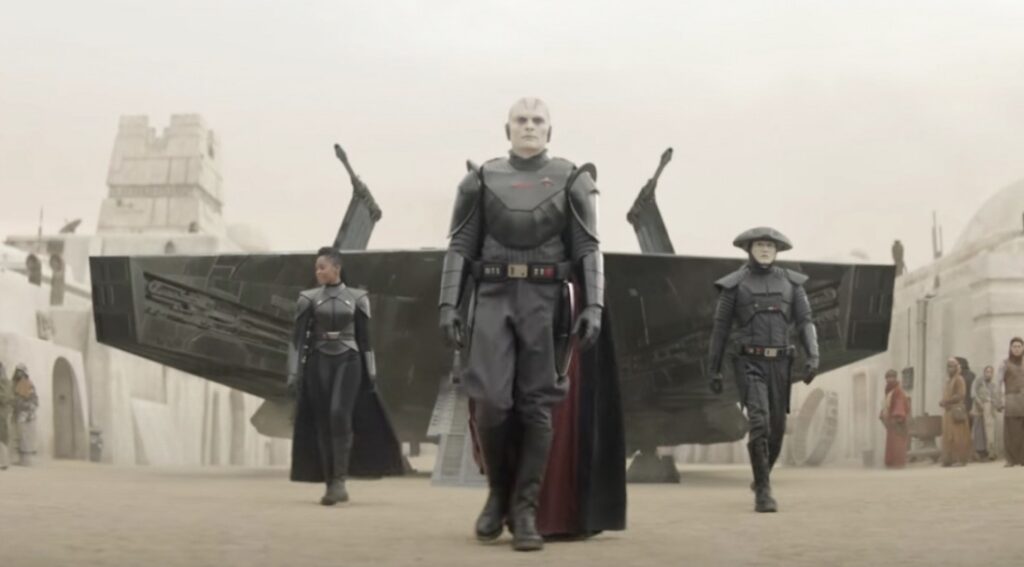 We’re less than two weeks away from the release of the first two episodes of Obi-Wan Kenobi hitting our screens, but an alleged spoiler filled plot detailed description of the debut episode has arrived online courtesy of a report from MakingStarWars.

The episode reportedly opens during the events of Order 66 on Coruscant. Two padawan’, a girl and a boy, are fleeing the Jedi Temple as Clone Troopers murder the Jedi inside. Though not stated in the report, it’s speculated these two kids are characters we meet later in the story as adults.

The story allegedly picks up ten years later on Tatooine where we see Obi-Wan Kenobi (Ewan McGregor) riding his Eopie approaching Anchorhead. Kenobi tied up the creature and proceeds to take transport into the dune sea for his day job, which is supposedly some form of “sand whaling”. The employees work for a tyrant who bullies and takes advantage of those working for him, but Kenobi keen to not attract attention remains silent.

Once done with his job for the day he returns home and meets with a Jawa named Tika who awaits him. Tika supposedly steals from Kenobi and the Jedi is often forced to buy back his own items. Kenobi buys supplies from the Jawa who convinces Obi-Wan to purchase a T-16 Skyhopper toy. Following his interaction with Tika, Kenobi readies for bed and attempts to reach out through the force to communicate with his old master, Qui-Gon Jinn, but Kenobi is unsuccessful in reaching his master.

The next morning Kenobi watches over the Lars homestead. Once nobody is around, Kenobi places the T-16 toy outside the homestead in hopes that the young Luke Skywalker (Grant Feely) will find it, but unfortunately for Obi-Wan, it’s Owen Lars (Joel Edgerton) who finds the gift and hides it away so Luke cannot find it. We then supposedly cut to Alderaan where we see a young Leia Organa (Vivien Lyra Blair) living in a lavish castle with her parents Bail (Jimmy Smitts) and Breha (Simone Kessel) who adore their daughter and her spirited personality. The trio have a conversation about Leia being adopted, but Bail and Breha emphasise that they love her with all their heart. Leia at some point is playing with her small droid named Lola, which Breha takes from her and Leia later steals back. Bail and Breha later converse that they fear for the safety of their daughter.

Back on Tatooine a young Jedi named Nari (Benny Safdie) scrambles through the streets clearly trying to not be seen as he scans the crowds attempting to find something or someone. The Inquisitors ship, The Scythe, lands and the Grand Inquisitor (Rupert Friend), The Fifth Brother (Sung Kang), and Reva/The Third Inquisitor (Moses Ingram) exit the vehicle. The trio are seeking out Nari, but Reva claims she senses something else, possibly Obi-Wan Kenobi. The Grand Inquisitor puts Reva down claiming he’s a shadow and that she will not find him.

The trio walk through the town and Reva is eager to draw out Nari, but the Grand Inquisitor informs her she must wait. They intimidate and interview the locals, but one attempts to stand up to Reva who cuts off his hands to the shock and amusement of the Grand Inquisitor. Owen Lars confronts Reva and tells her that these people don’t know of a Jedi and explains how he personally detests them to the Inquisitor. Reva is about to lash out at Lars, but she’s called away by the Grand Inquisitor who takes his underlings to a bar and explains that the Jedi are easy to draw out due to their morality. The Grand Inquisitor threatens the bar tender which successfully lures out Nari who attempts to save the bartender and runs, but the inquisitors manage to wound the young Jedi. As Nari scampers away, the trio of Inquisitors discuss this being part of their plan and that their plan on Alderaan has been a success with their hired pirates managing to successfully kidnap a princess. The trio also discuss Anakin Skywalker at some point, and how he broke free of the Jedi teachings – they seem to idolise him.

Kenobi enters Anchorhead to meet with Lars. The duo seem to periodically have these meetings, and at this one Kenobi states he wants to train Luke. Owen forbids it and explains to Kenobi that he’s brought the Empire to Tatooine which is making things worse, and not better for Luke and his family. The dejected Kenobi rides off back home, but he hears a voice call out his name which he pretends to ignore. The voice calls out and explains his name is Nari and he’s been searching for the Jedi master for many years. Nari pleads for Kenobi’s help and claims he’s going to die without it, but Kenobi will not help and instead tells the Jedi to bury his lightsaber in the sand and disappear before he walks away.

Kenobi eventually arrives home where he finds Bail Organa waiting for him. Organa explains that his daughter has been taken and asks Kenobi for his help in rescuing the child. Knowing the importance of Leia, Kenobi accepts, but the duo suspect more is at play than meets the eye. Kenobi also believes with the Empire on planet looking for Nari, it’s possibly safer for him to leave the planet so he doesn’t draw attention to himself or Luke. Kenobi proceeds to dig up his lightsaber from beneath the sand and makes his way into Anchorhead where he see’s a dead body strung up in the town – its Nari. The Jedi Master boards a transport and heads for Daiyu where he’s set to meet a contact of Organa’s. The Inquisitors still sense the presence of a Jedi despite killing the one they were seeking and feel it disappear once the transport has left…their plan is coming together, they will finally get enough dirt on the Organa family to execute them due to their affiliation with the Jedi coming to rescue Leia. The end.