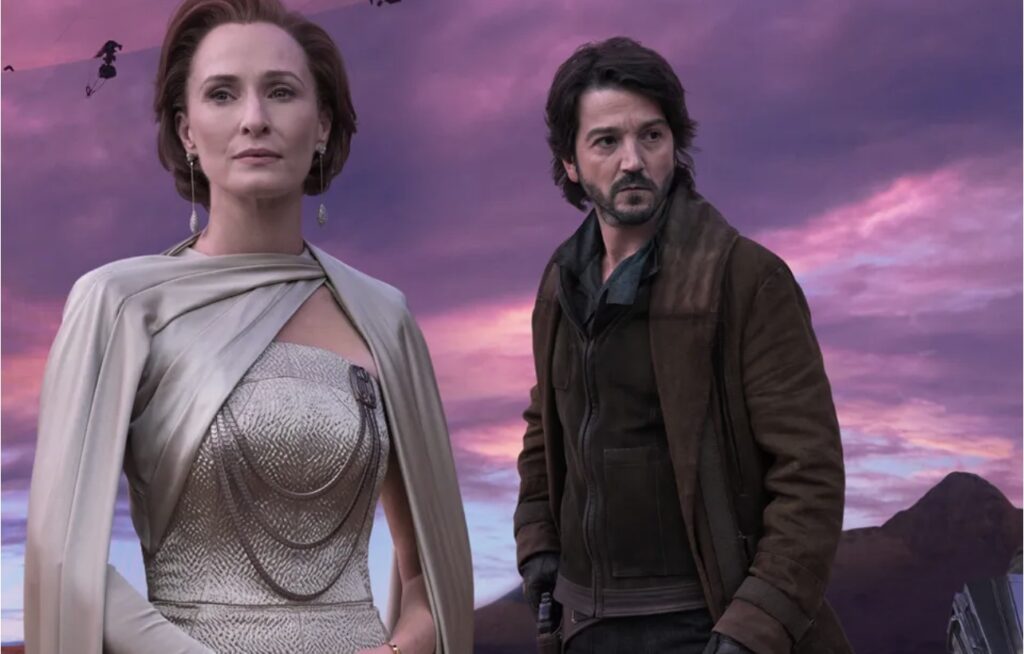 The man behind the Bourne series, and the saviour of Rogue One, Tony Gilroy is showrunning Andor and was sure to set expectations regarding Cassian’s beloved companion K2SO, “We don’t have Alan Tudyk, not yet, anyway”. Gilroy is only reinforcing what was previously mentioned by Tudyk himself, that K2SO is not in the first season of Andor, but Tudyk hopes to reprise the role in the second season, something Vanity Fair and Gilroy confirmed is already being prepared, “It is a second season, but it’s really, for me, the second half of the novel. This first season is about him becoming a revolutionary, and the second 12 episodes take him into Rogue One.”

Last week Diego Luna stated that Andor is a migrant story, and within the newly released article by Vanity Fair, the Narcos: Mexico star expands on that quote, “It’s the journey of a migrant, which to me is everything I come from, That feeling of having to move is behind this story, very profoundly and very strong. Not being able to be where you belong. That shapes you as a person. It defines you in many ways, and what you are willing to do.” Last week it was revealed by Gilroy that the opening of the series will see the destruction of Cassian’s birth world, and that most of the series will take place of his adopted home world, “His adopted home will become the base of our whole first season, and we watch that place become radicalized, then we see another planet that’s completely taken apart in a colonial kind of way. The Empire is expanding rapidly. They’re wiping out anybody who’s in their way.”

Gilroy claims that Cassian is “morally dark” is this series and went on to say, “In the beginning of it all, he couldn’t give a shit about any of that, He’s a thief. He’s a ducker and a diver. He has a lot of anger about his childhood, and about the Empire, but he has no place to put it. He just doesn’t believe in anything at this point” with Luna adding that “he’s someone surviving in the dark times. If you know the Star Wars universe and story, then you know this is the darkest of times.”

However Cassian’s anger, selfishness and morally ambiguous ways is what makes him the perfect spy according to Gilroy, “He’s seductive, Seductive in a way where he’s manipulating people. He compromises, he changes his mind. He’s really a perfect kind of spy, warrior, killer. How do you get to that place—and then sacrifice yourself? taking someone who’s really anti-revolution, and turning them into the most passionate person who’s willing to give themselves to save the galaxy.”

When discussing the role of Mon Mothma, she’s compared to the role of M in the recent James Bond films, and at this point in her life she’s still on Coruscant attempting to navigate the turmoil of Emperor Palpatine’s new autocracy, but Mothama and Andor’s story will not intersect there, they won’t meet until the second half of the season, but Gilroy expects fans to be tweeting about Mon Mothma by the end of the fourth episode and that Mothma will become an unforgettable character even for casual viewers by the episodes end. By the end of episode four viewers will have seen Cassian get in very big trouble attempting to sell something to “save his ass” but he’s been watched by an unnamed Rebel talent scout with this storyline also focusing on two mysterious characters played by Stellan Skarsgård (Thor, Chernobyl) and Adria Arjona (Morbius, Pacific Rim: Uprising). Vanity Fair compares the structure of the series to Better Call Saul, which intersects storylines that occasionally touch directly.

Lastly Gilroy explains that the events of Andor, which is set five years before Rogue One, will have a big impact on the stories we know and that what fans believe they know might actually be incorrect, “There are certain events that happen in these five years that are important and need to be paid attention to. There are certain people, characters that are legacy characters, that the audience, the passionate audience, really feels that they have an understanding of and know, In some cases they’re right. And in some cases, what we’re saying is, ‘What you know, what you’ve been told, what’s on Wookiepedia, what you’ve been telling each other … is really all wrong. It’s upside down, or it’s sideways, or it’s the opposite of what you thought was true. Or it’s way more interesting than you had ever thought. Or that’s a lie and there’s a reason for it. I would say that there’s some surprises in store.”

Andor releases this summer and If you want to keep up-to-date with the latest leaks, news, reputable rumours, and my exclusive reports, then be sure to sign up to my mailing list below. And if you’re a fan of my work and would like to show your appreciation, you can tip me on my Ko-Fi page here.