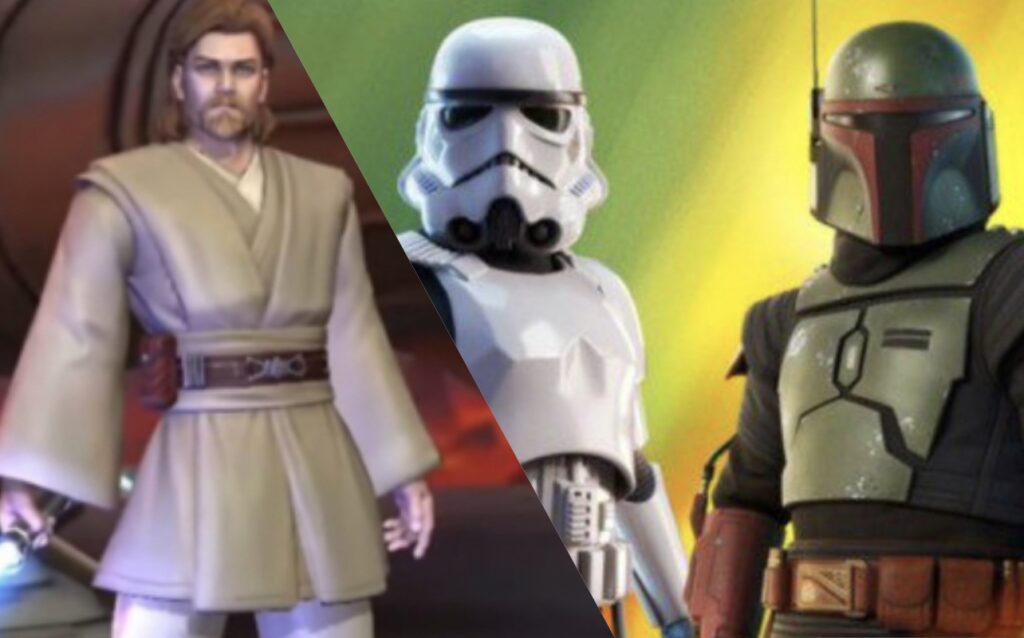 UPDATE: Fortnite and Lucasfilm have since released an image of an unknown character gripping Obi-Wan Kenobi’s lightsaber. The unseen character is clearly wearing a robe, and given they’re holding Obi-Wan’s lightsaber, it seems likely Kenobi is the character being teased. It’s unknown if the supposed Kenobi skin will be released on May 4th, or if it’ll be announced close to the release of his upcoming Disney+ series, the reason I’m suggesting this is because previously a Boba Fett skin was announced in November 2021 ahead of its release on December 24th, so there’s precedent of Epic and Lucasfilm announcing a skin well in advance of its release.

There’s been many rumours regarding the next season of Fortnite having heavy ties to Star Wars, but we’re still a month a way from the start of the new season. However it looks like Star Wars content will be added to the game later today, or tomorrow in celebration of May the 4th,

Fortnite just received an update and data-miners wasted no time digging through the new files to see what’s been added, and it appears Star Wars fans won’t be disappointed. Data-miners found Obi-Wan Kenobi’s lightsaber which has led some fans to speculate if Kenobi himself is being added as a skin to Fortnite. However the lightsaber is likely just a new addition to the lightsaber set added back in December 2019 which featured Luke Skywalker’s green lightsaber, Kylo Ren’s, Mace Windu’s and Rey’s lightsaber as the background of the image indicates it’s a mythic weapon. These items could not be bought, but instead they were weapons found on the map and could be used in game, and they’re believed to be making a return to the game later today.

Data-miners have also discovered new challenges relating to May the 4th and the lightsaber weapon being added into the game. The challenges also reveal that the E-11 Blaster along with Stormtrooper NPC’s are being added to the game in celebration of May the 4th. It was previously rumoured that Stormtroopers would be added as NPCs next season when they were found in the game files recently. Upon completion of the challenges, players will be rewarded with an Empire banner icon. The challenges are as follows:

Survive storm phases while carrying a lightsaber: There’s Jedi contraband out there. Collect it, and hold onto it for confiscation. The Emperor will know what to do with this.

Damage opponents within 30 meters using the E-11 Blaster: Only the best Stormtroopers can hit targets at that distance. Huh. Nice shot. The aiming module in my blaster must be broken…

Complete a Bounty from a Stormtrooper: Some scoundrels have betrayed the Empire. Take care of them. The Emperor will be pleased.

Drive a vehicle from Chonker’s Speedway or Logjam Lumberyard to a Stormtrooper checkpoint: This unsanctioned landspeeder must be confiscated and brought to us. How does this thing drive without repulsorlift engine?

Land at a Stormtrooper checkpoint: Mission failure is not an option. Your resilience is impressive.

Block hits using a Lightsaber: Show us how our enemies are deflecting our blaster bolts. It can’t be the force. That’s all a lot of simple tricks and nonsense.

It’s also been reported by ShiinaBR that past Star Wars skins will be added to the item shop on May the 4th. Past skins include Rey Skywalker, Finn, Kylo Ren, Zorii Bliss, Sith Trooper, Stormtrooper, Boba Fett, Fennec Shand, and Black Krrsantan. It’s unknown if the Obi-Wan Kenobi skin will be released alongside the past skins, or later this month.

Eagle eyed Fortnite players have also discovered Star Destroyers in the sky following the latest update. Previously Epic Games chief creative officer, Donald Mustard, teased the addition of a Star Destroyer when he shared an image of a cloud shaped like the iconic ship via social media.

Last year fans and players were left disappointed on May the 4th when Fortnite did not celebrate the occasion despite rumours past skins and lightsabers would be returning to the Battle Royale. It appears Epic Games and Lucasfilm took the criticism of last year onboard, and have given fans something fun to look forward to in celebration of Star Wars day.