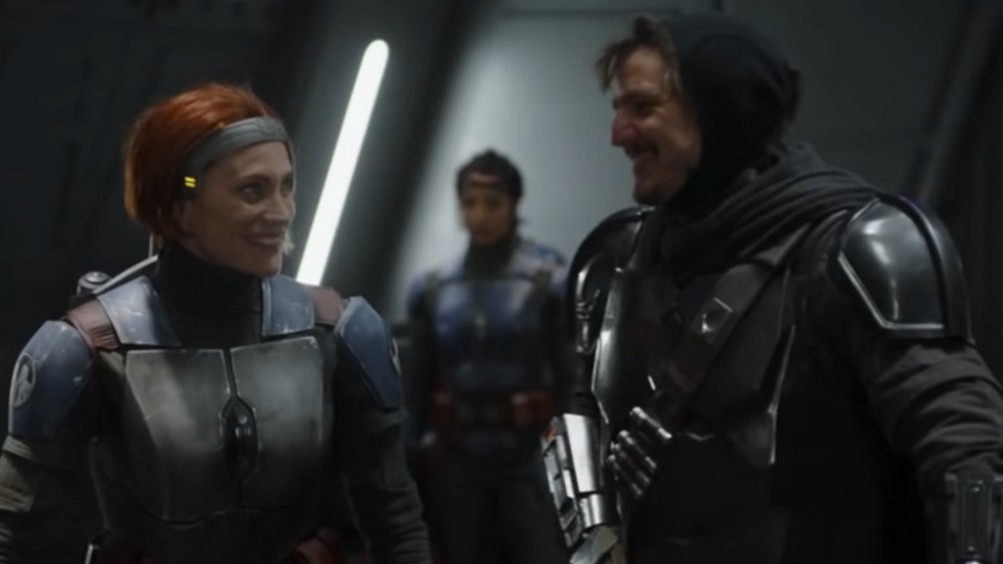 Just a few days ago Bo-Katan Kryze actress, Katee Sackhoff, posted an apology to her Instagram account as she was unable to make it to the Fan Expo in Denver due to work commitments, and within the video she gives a major hint as to what exactly she was working on. In her video, Sackhoff said, “I ended up working much, much later than anticipated on a little show that we all know and love and it made it quite difficult for me to get myself to the convention in time”, before signing off the video saying, “This is the way”.

Back in March I’d heard that there were plans for additional filming, which could mean pick-ups or reshoots, but perhaps scenes they were unable to film at the time (more on that later). When I was told about additional filming on the third season of The Mandalorian, I was told to expect them around July and August, and Sackhoff’s comments seem to add credence to what I previously heard. At the time I speculated if the Summer shoot would be when Pedro Pascal would be able to film scenes for the highly anticipated third season, as I believe he didn’t film any scenes throughout principal photography on The Mandalorian season three. Pascal during principal photography of Mando was busy filming The Last of Us for HBO, though he did have a break from December into earlier months of this year, but at the time I heard he hadn’t filmed for Mando. Pascal wrapped filming on The Last of Us last month, and is currently not filming another project, but he is in the midst of pre-production on the short film, Strange Way of Life.

It’s also worth adding a comment made by Giancarlo Esposito who plays Moff Gideon in the series back in April during an interview with The Rich Eisen Show. When asked about the release of the third season of The Mandalorian, Giancarlo said, “I’ve got a little few things to do in regard to that, to put some finishing touches on what I do. I believe it’ll be sometime this Summer, no date set yet, but coming soon”, following his comments some outlets and fans took this to mean The Mandalorian’s third season would release in the Summer of this year, at the time we said it would not be the case and since then it’s been confirmed that the third season would release in February.

As I’ve already mentioned, from what I believe, this is planned additional photography and are certainly not anything to worry about. I know some fans or content creators will try to spin the filming as panicked reshoots in an attempt to get fans to worry, but they are not and are a normal part of the production process.

The Mandalorian season three is slated to release in February on Disney+, and will be followed by Ahsoka which is deep into production at both Manhattan Beach Studios and El Segundo, and is also planning to release sometime next year.

I plan on sharing more details on other upcoming Star Wars productions very soon, so if you want to keep up-to-date with the latest leaks, news, reputable rumours, and my exclusive reports, then be sure to sign up to my mailing list below. And if you’re a fan of my work and would like to show your appreciation, you can tip me on my Ko-Fi page here.