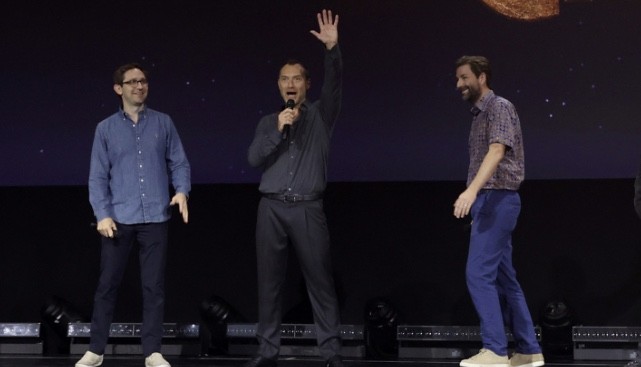 Over the weekend we had the much anticipated D23 Expo which contained a presentation from Lucasfilm. During the presentation Lucasfilm president, Kathleen Kennedy, brought out various guests to promote upcoming projects from the studio releasing over the next twelve months or so which include Andor, The Mandalorian, Ahsoka, Tales of the Jedi, Willow and Indiana Jones 5, but the part of the presentation I want to single out today is Skeleton Crew.

During the presentation Kathleen Kennedy was already on stage along with the creator of The Mandalorian, Jon Favreau, and creator of the Ahsoka series, Dave Filoni. Kennedy, Favreau and Filoni are all producers on an upcoming Star Wars series titled Skeleton Crew, which was announced back in May at Star Wars Celebration. The trio brought out the creators of the series at D23, Jon Watts (Spider-Man: No Way Home) and Christopher Ford (Chaos Walking) to briefly chat about the series. Ford started things off by asking what Skeleton Crew was and explaining that it’s about a group of children who’ve gotten lost in the galaxy with Watts adding that it’s set during the new republic era just like The Mandalorian and Ahsoka series. None of this is new information, the creators said all of this back at Celebration, but here’s where the confusion has seemingly arose.

Jon Watts told the audience, “We’ve actually been filming it for a few weeks. Dave [Filoni] and I were shooting yesterday and it’s been great”, before Filoni interjects and says, “on the same lot. It’s cool. We come and visit each other, it’s nice”, for those who may not know both Skeleton Crew and Ahsoka are currently filming at Manhattan Beach Studios in California. Ford then announces they can show one image which featured the only officially announced cast member, Jude Law, who was then brought out on stage as he was at Celebration. Law thanked those in attendance for the warm welcome before Watts joked that Law has to get to work, “but now you have to get back to work, and so do we [Watts and Ford]“, before Ford said that fans will be able to see the series soon on Disney+ before exiting the stage. You can see footage of the trio discussing filming in a between of mine below.

You may be wondering, what’s the confusion? Well since the event there’s been rumours on social media and Reddit that the series had wrapped and the origins of this supposedly came from Jude Law on stage claiming so, which as you can see is not the case. I don’t know what fans could have misquoted as I personally believe Law, Watts and Ford all spoke well and clearly. The only mention of filming was that they’d been filming for a number of weeks and that they had to get back to filming. No mention of filming ending or ending soon.

Skeleton Crew began filming in late June with filming due to run until December, though it could go longer. The series is filming at Manhattan Beach Studios and has also been filming at an unknown studio in Culver City and at California State University in Dominguez Hills. As previously mentioned, Ahsoka is also filming at Manhattan Beach Studios and is expected to wrap filming sometime in November.