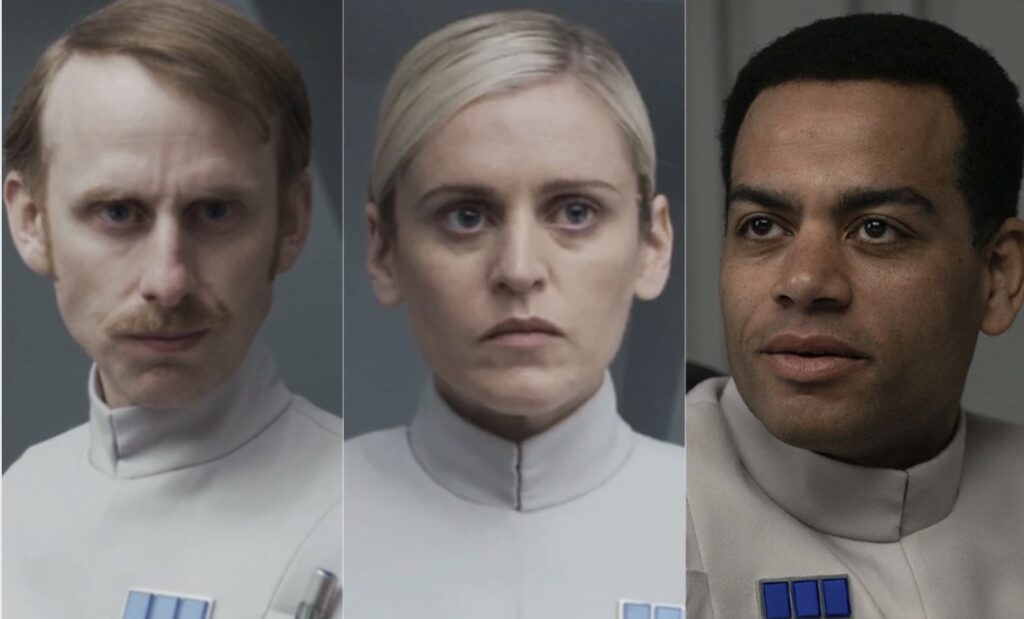 I must stress that this article is merely a speculation piece based off of a shot seen in an Andor TV spot and should not be treated as a report. Yesterday an image of ISB officers looking at a hologram of Cassian Andor, the same hologram Syril Karn used earlier in the series, made the rounds as an apparent leak from a future episode, but when digging through various promotional material I discovered that the scene had actually shown up in a TV spot that was released last month, but within the same television spot, I noticed something that could possibly be considered more revealing of a plot point to come later in the season.

In a brief shot we Supervisor Lonni Jung, played by Robert Emms (Chernobyl), entering what appears to be a dimly lit and grimy elevator dressed in dark clothing with a worrisome look upon of his face as a voiceover from Mon Mothma echoes, “there’s a new spy everyday”. Jung’s choice of clothing and surroundings are a far cry from his crisp white ISB uniform and pristine Imperial facility’s. We haven’t seen much of Jung in the series, and most recently saw him get criticised by Major Partagaz and he made a reference to Scarif earlier in the season.

Given his surroundings I wonder if Emms has ventured into the underbelly of Coruscant, for what reason I don’t know, but it’s not out of the realm of possibility that perhaps he’s an informant for Luthen or Kleya, both of whom are located on the planet, it wouldn’t be the first time this series that we saw an Imperial employee secretly working for the growing Rebellion (Gorn) and in a separate image of Luthen, we see him conversing with a person who appears to be Jung. The actor playing Jung, Robert Emms, is one of the more significant names amongst the ISB actors, so you’d expect that he may have somewhat of a bigger role to play than what we’ve seen this far in the series.

It’s nothing major, but the shots, at least to me, could point towards an exciting development in the series, but I could also be reading far too much into the footage. However in a series being show run by the mastermind behind the Bourne franchise, Tony Gilroy, and touted as a spy-espionage-thriller, it really does feel entirely possible within the genre and in Gilroy’s hands.