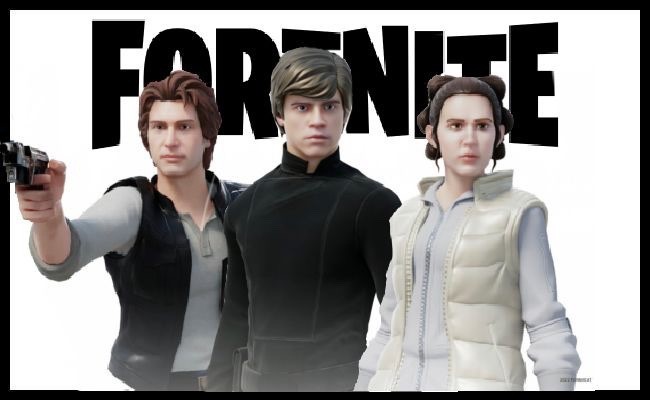 Various Fortnite content creators and data miners took to Twitter today to reveal that a trio of “beloved” characters as well as mysterious in-game surprises will be available on Fortnite tomorrow (November 1st) and that they believe the characters to be IP based. The trio will come with a back bling each, a pick axe each, and one glider and emote. Past rumours from a proven insider claimed that Han, Luke and Leia were all in development months ago and that they’d be released between October of this year and May of next. Let’s take a look at the evidence pointing towards another exciting Fortnite x Star Wars collaboration.

Following an update on the game in September, data miners discovered that chests containing Luke Skywalker’s green and blue lightsabers had been added to the files along with healing items. Star Wars lightsabers have been made available in Fortnite various times before, most recently this past May where a selection of lightsabers were made available including Obi-Wan Kenobi’s, Kylo Ren’s, Mace Windu’s and Luke Skywalker’s green lightsaber. The May release coincided with May the 4th and later that month saw the release of the Obi-Wan Kenobi skin along with past skins including The Rise of Skywalker and The Book of Boba Fett characters returning to the Fortnite Item Shop. Kenobi’s lightsaber was not available in past Star Wars events, so the addition of Obi-Wan’s lightsaber during the event pointed towards the skin being released which currently seems to be happening with Luke Skywalker.

Also during September, in addition to discovering chests with Luke Skywalker’s lightsabers, data-miners also discovered challenges for this current season (Season 3: Chapter 4) relating to Star Wars and Luke Skywalker specifically. The challenges were worth 30,000 XP each and included accolades. An item labelled Star Wars Junk Rift was also discovered, a variant on an in-game item known as the Junk Rift which tears open a rift in the sky and for various pieces of junk to come crashing down upon opponents.

Lastly back in June a leaker on 4chan (I know) claimed that Luke Skywalker, Han Solo and Leia Organa were all being developed to be added to Fortnite between October this year and May of next. The user accurately leaked the battle pass for Season 3: Chapter 3 which included a Darth Vader skin, as well as a second Naruto collaboration, so at this point they seem very reliable. The user claimed that Luke’s skin is based on his look in Return of the Jedi with an alternative version of the skin sporting a hood. The user claimed that Han’s look was original and more akin to Deckard’s look in Blade Runner as he sports a trench coat, but I wonder if the insider isn’t a massive Star Wars fan and forgot about Han’s look on Endor where he sports a long, camouflaged jacket. Lastly the user claimed that Leia’s outfit would be based on her look in A New Hope with an alternative being Leia’s bounty hunter look from Return of the Jedi, which we are to assume is her Boushh disguise, but perhaps the look will be without the helmet.

As you can see, evidence for a new Star Wars and Fortnite collaboration has been mounting over the coming months and feels inevitable. As an active Fortnite player and huge Star Wars fan this very much excites me, but I’m still trying to downplay my expectations. I’m also disappointed that it appears we won’t be getting a collaboration with the Andor series which is unusual as recently Lucasfilm and Fortnite have partnered to release skins for Disney+ series including The Mandalorian which had Din Djarin with a Grogu back bling, The Book of Boba Fett which had the titular character along with Fennec Shand and Black Krrsantan, and most recently Obi-Wan Kenobi which saw the release of Kenobi and Darth Vader. I’d be over the moon to get my hands on a Cassian Andor, Bix Caleen, Syril Karn or anybody else from the series.