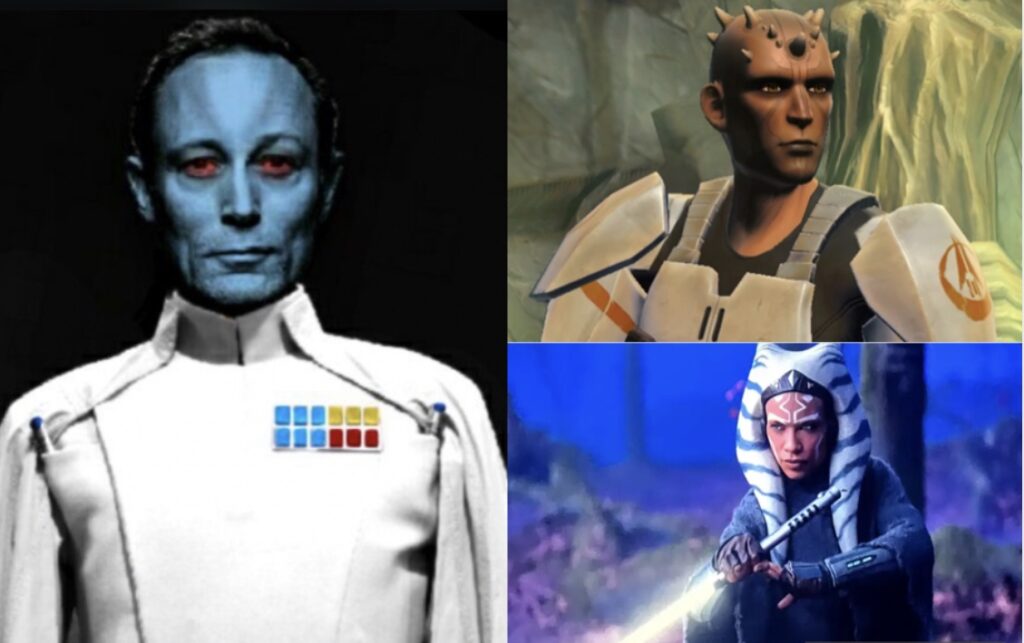 Hello there! Before we crack on with the article, I kindly ask if you’d consider showing your support and appreciation for my work by tipping me via my Ko-Fi page here. Tips are quite rare around these parts, but I assure you no matter how big or small, each tip is deeply appreciated. Now, let’s get on with the news!

It’s a topic that’s been talked about ad nauseam within the Star Wars fandom, but once again the topic of who is playing Grand Admiral Thrawn has arose. Ever since the Ahsoka series was first announced back in 2020, fans have long speculated who will be playing the live-action version of the characters Ezra Bridger and Grand Admrial Thrawn. Pretty much since the announcement, Mena Massoud (Aladdin) and Lars Mikkelsen (The Witcher) have been rumoured and popular fan casts for the role. Recently it was revealed that the role of Ezra Bridger had been cast in the form of Eman Esfandi (King Richard) ending rumours and speculation that Massoud would land/landed the role. However Lucasfilm and the trades have kept shtum on who will portray the fan-favourite Thrawn in live-action.

In September, Cinelinx (who reported Esfandi’s casting) said they’d heard conflicting things on who will be playing Thrawn, but most recently heard that it was Lars Mikkelsen who voiced the character in the animated series, Star Wars: Rebels. Six weeks on from that claim, the editor-in-chief of The Ronin, Christopher Marc, is claiming that he has a reliable source working on Ahsoka that’s informed them of Mikkelsen playing Thrawn in the upcoming series, “Looks like Ahsoka has indeed hired Lars Mikkelsen to play THRAWN in the series and will have his traditional white uniform in the streaming series.”

If true then I’m sure many fans will be elated by the casting, and it’s a big testament to Mikkelsen’s acting chops as he’d be one of only two members of the Rebels voice cast honoured with the chance to portray the character he voiced in live-action, the other being Katee Sackhoff (Battlestar Galactica) who plays Bo Katan Kryze. Ashley Eckstein voiced Ahsoka in both Rebels and Clone Wars, but Rosario Dawson (Dopesick, Clerks III) was cast in the role back in 2019 ahead of the characters appearance in The Mandalorian, Tiya Sircar (The Good Place, The Afterparty) voiced Sabine Wren in Rebels, but Natasha Liu Bordizzo (Dayshift, The Voyeurs) has been cast as the live-action portrayal, Eman Esfandi replaces Taylor Gray (High Expectations, The Wheel) as Ezra Bridger, and Mary Elizabeth Winstead (Birds of Prey, Fargo) is rumoured to be playing Hera Syndulla who was previously voiced by Vanessa Marshall (Harley Quinn, Young Justice) in Rebels.

Marc also made additional claims on the series. Marc claimed that Zabrak’s, the Maul species, are appearing in the Ahsoka series as stormtroopers and stated that their uniforms feature the colours of white and burgundy. He added that though he doesn’t know if Captain Rex is in Ahsoka, he’s heard that Lucasfilm have plans for the character to appear. The final claim from The Ronin EIC is that Ezra Bridger would sport a goatee in Ahsoka, a claim we could refute as Eman Esfandi has been sporting the same look since June which includes a beard and long hair which you can see below, the picture on the right is from twelve days ago whereas the image on the left is from September 11th.

The Ahsoka series is currently filming at Manhattan Beach Studios and in El Segundo with production appearing to be going well. The series began filming in May and is due to wrap up sometime next month with a release expected next year. Skeleton Crew is also currently shooting at Manhattan Beach Studios, and is looking to wrap filming by the years end.

If you have made it to this point in the article and enjoyed your read, or if you’re a regular reader of Bespin Bulletin then I kindly ask if you’d consider showing your support and appreciation by tipping me via my Ko-Fi page here. Tips are rare around here, but I sure you no matter how big or small, each tip is deeply appreciated. Thank you, and I hope you enjoyed the article.