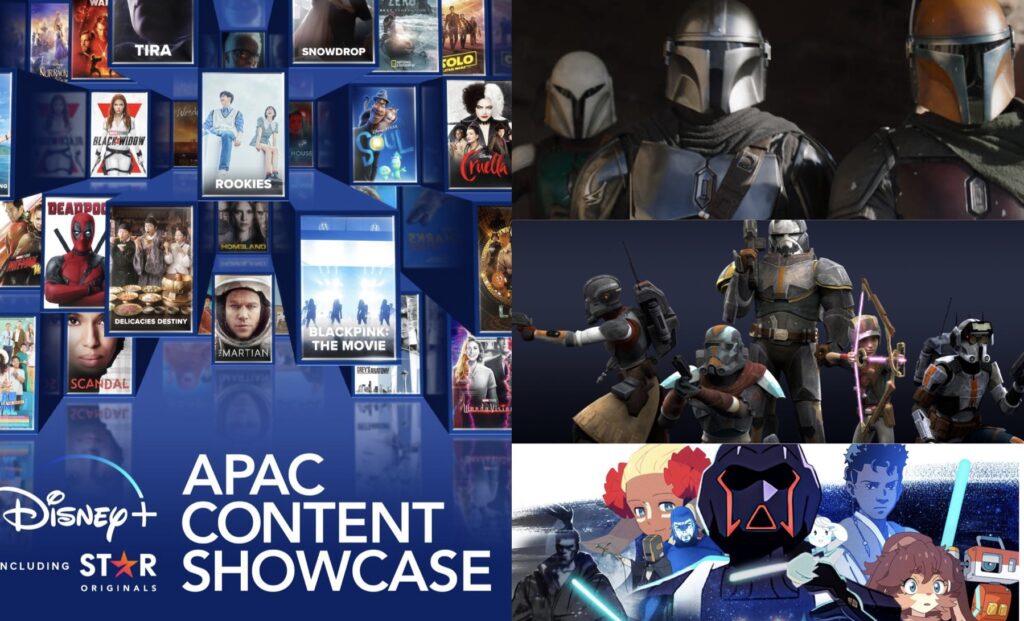 Earlier today Disney debuted new trailers and exclusive footage to those in attendance at their APAC Showcase, and Lucasfilm had a big part to play in the presentation. According to those in attendance, Lucasfilm debuted multiple trailers for their upcoming Star Wars series as well as a trailer for their next big theatrical release, Indiana Jones 5. Information regarding what was shown in the trailers is pretty non-existent at the moment, but I will be updating this article with new information as it becomes available.

Following The Mandalorian trailer, Lucasfilm moved onto the series that’s next to release after Mando, Ahsoka. Though Lucasfilm debuted footage for the upcoming series back at Star Wars Celebration, they did not show that footage or any footage at all during the APAC showcase, and instead opted to show three images from the series. Two images were of our titular character, Ahsoka Tano. The first image showed Ahsoka standing in a cave or a tomb on top on a circular stone as light beamed down from above and the second just showed Ahsoka wielding her lightsabers. The third and final image was of Sabine Wren, played by Natasha Liu Bordizzo (The Voyeurs), but it’s unclear if it’s the same image shown at D23 where she’s looking at the mural from the series finale of Star Wars: Rebels, or an entirely new image.

Lucasfilm switched gears following the Ahsoka images and turned their attention to animation where they debuted a new, and well overdue, trailer for the upcoming second season of The Bad Batch which is due to release on January 4th. Not much information is available regarding the trailer, but it sounds like a re-tread of the trailer released earlier this year as cameos from Emperor Palpatine and Commander Cody were mentioned. Lucasfilm also debuted a trailer from the second volume of Star Wars: Visions which is also set to release sometime next year. The sneak peek at Visions’ second season showcased various animation styles including more traditional anime and stop motion.

Lucasfilm wound things down with a message from Lee Jung-Jae (Squid Game) who spoke briefly about The Acolyte and how thankful he was to be part of the project before ending on a high with the teaser trailer for untitled fifth Indiana Jones film. The teaser shown appears to be the same one Lucasfilm showcased at D23 in September, and despite rumours that the fifth entry in the franchise is titled Indiana Jones and the Dial of Destiny, the teaser ended simply with the title (and we assume not final), Indiana Jones. Director of Indy 5, James Mangold (Ford vs Ferrari), has previously revealed that the release of the teaser trailer is imminent and CCXP, which takes place tomorrow, has promised the Lucasfilm panel will deliver news on the highly anticipated fifth Indiana Jones movie.

In addition to Lucasfilm debuting multiple Star Wars trailers as well as one for Indiana Jones 5, Disney and their studios showed new trailers for many of their upcoming films and television series including Marvel Studios who debuted brand new trailers for Ant-Man and the Wasp Quantumania, Guardians of the Galaxy Vol. 3 and Loki season two, noticeably absent from the Marvel Studios segment was Secret Invasion which is the next Marvel series set to be released. Guardians and Ant-Man are rumoured to officially release their new trailers ahead Disney’s last blockbuster of the year, Avatar: The Way of Water, which debuted new clips at the event.