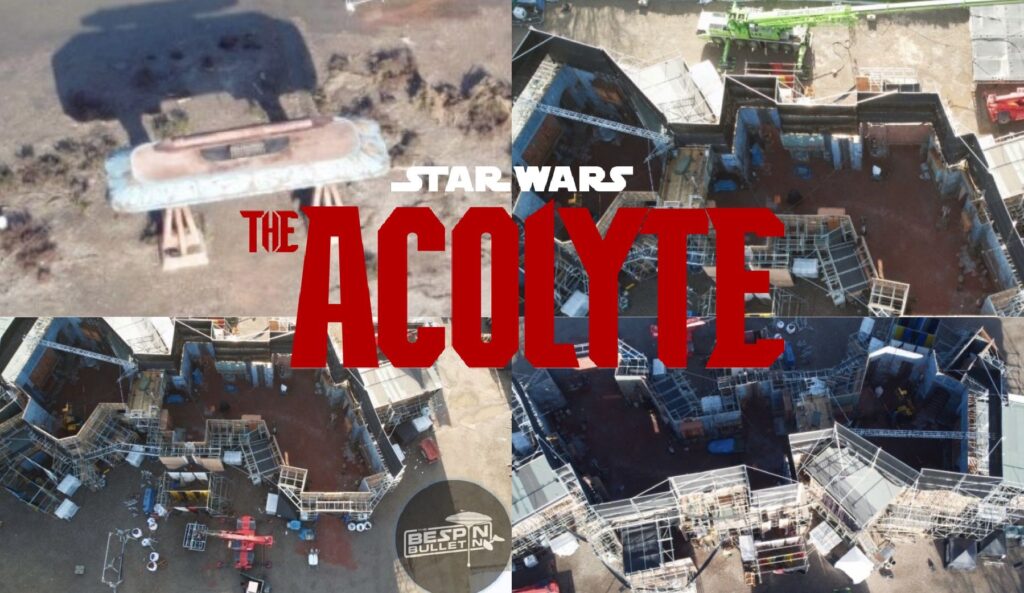 It’s been a couple of months since we’ve seen set photos of the upcoming live-action Star Wars series created by Leslye Headland (Russian Doll), The Acolyte, from Shinfield Studios, but we’re able to now bring you exclusive images from the location.

When compared to the last set of photographs, you can see that this set has progressed and is quite possibly the final look for this location. Sources of mine have said that the set has been in use throughout November and the tail end of October, so you’d imagine this is it’s final look. The set itself does give me vibes of Ferrix, the home planet of Cassian Andor featured in Andor, given it’s a town with red sand, but the town seems to sport a lot of blue paint on its buildings. When scenes are filmed at this set, I’ve seen many blue screens placed above and around the structures.

In addition to seeing an update to the set that’s been known for quite some time, this new structure pictured below has also appeared on the Shinfield Studios backlot. Currently it’s unknown if this is a standalone piece/set, or if it’s related to the town set pictured above or even it’s been made to be used on a sound stage inside of the studio. My personal guess is that it is it’s own set and that the blue screens pictured to the right of the structure surround it when scenes are being filmed.

I’ve been fortunate enough to have had pretty good coverage of The Acolyte so far, exclusively breaking the series would film at Shinfield Studios back in July, a series of set photos and exclusively reported when production began. Hopefully I can continue to bring you updates on the production over the coming months and hopefully in addition, the second season of Andor. Below you can see two additional images of the set.

The Acolyte started filming at Shinfield Studios in Berkshire, England towards the tail end of October, with filming expected to run until May. The series, described as a mystery-thriller, will take viewers into a galaxy of shadowy secrets and emerging darkside powers during the final days of the High Republic as we follow a former padawan and her Jedi master investigating a series of crimes committed by sinister forces. Amandla Stenberg (Bodies, Bodies, Bodies) leads the cast which also includes Lee Jung-Jae (Squid Game), Dafne Keen (Logan), Charlie Barnet (Russian Doll), Jodie Turner-Smith (White Noise), Manny Jacinto (The Good Place), Rebecca Henderson (Inventing Anna), Dean Charles-Chapman (1917) and Carrie-Anne Moss (The Matrix).