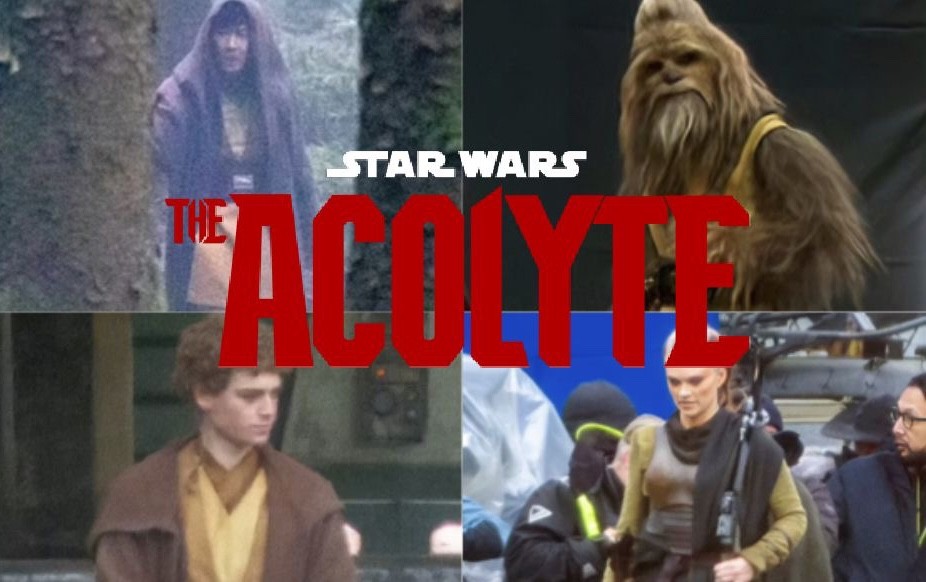 Over the last few months we’ve seen a large set built for The Acolyte at Shinfield Studios located in Berkshire, but despite numerous pictures of said set, we have not yet seen any members of the cast in front of the camera, that is until today.

Courtesy of SplashNews.com via Daily Mail, we now have our first look at a new set for The Acolyte, but more importantly we’ve got see multiple members of the cast including the series leads, Amandla Stenberg (Bodies, Bodies, Bodies) and Lee Jung-Jae (Squid Game) along with multiple other cast members in costume.

Jung-Jae can be seen keeping a low profile in a forest as a Jedi master sporting gold and brown robes. Jung-Jae has been cast as the male lead of the Leslye Headland created series. Amandla Stenberg is the series true lead and is the former padawan of Jung-Jae’s Jedi master. Though Stenberg isn’t seen alongside Jung-Jae in these images, she was spotted on set.

In addition to Lee Jung-Jae, 1917’s Dean Charles Chapman was spotted on set. Chapman can be seen sporting the infamous padawan braid along with gold and brown robes, extremely similar to the outfit that Jung-Jae’s character is wearing. With Chapman sporting similar attire and a padawan braid, I wonder if he’s Lee Jung-Jae’s new padawan following the assumed departure of Amandla Stenberg’s character from the Jedi order. Stenberg’s character can also be seen in the picture alongside Chapman sports a black vest and a green undershirt.

Below is an image of an unknown character and actress which Daily Mail believe to be Logan star Dafne Keen, but to me at least, it does not look like the actress. Keen recently revealed that the series will see the Sith infiltrate the Jedi order with the High Republic era series taking place one hundred years before the events of Star Wars: The Phantom Menace.

An unknown actress playing a Zabrak was also spotted on set. This is merely speculation on my part, but I wonder if this Zabrak is sort of royalty to this planet. The actress the Daily Mail believe to be Dafne Keen as well as an actress dressed in black and green garments both sport the same weapon, a weapon that looks to be a bow of some kind.

We also get our first look at a live-action Jedi Wookie, which according to the Daily Mail, shot scenes with Dean Charles Chapman outside of a spaceship, which can be seen behind the Wookie. In the image with Chapman, Amandla Stenberg can be seen, so I wonder if her character greet the Jedi upon their arrival to this currently unknown planet. The Jedi Wookie in the image above can be seen meeting the unknown Zabrak character outside of the aforementioned space ship.

Here you can see another unknown character wielding the same weapon as the character the Daily Mail believed to be played by Dafne Keen. The warrior accompanies the Zabrak and our series lead, Amandla Stenberg, can be seen sat in front of the two characters.

Stenberg in an image below can also been seen accompanying an additional character with red hair, who too sports the same bow as the supposed Dafne Keen character and the actress wearing black and green robes. My assumption based off of these images are that Stenberg’s character, a former Jedi padawan, now resides on this unknown planet and perhaps works for/protects the Zabrak character. The question I have is why are the Jedi meeting with the Zabrak? We know the series will follow Stenberg and Jung-Jae’s characters as they investigate a series of sinister crimes, and I wonder if the Jedi are called to this unknown planet as a crime has been committed or if they’re arriving on the planet to ask for the assistance of Amandla Stenberg’s character.

The Acolyte began filming towards the tail end of October and Shinfield Studios and is expected to film until May. The series itself is rumoured to release within the first half of 2024, exclusively on Disney+.

Thank you for reading the article and if you enjoyed your read, or if you’re a regular reader of Bespin Bulletin then I kindly ask if you’d consider showing your support and appreciation by tipping me via my Ko-Fi page here, each tip is deeply appreciated. You can also listen to the latest episode of our podcast, BOB The Podcast, at the bottom of this page and on all good podcast services (new episodes release on Thursdays) and you if you’re not already doing so, follow me on Twitter, Instagram, YouTube, TikTok, Hive, and Mastodon