Praetorian Guards in The Mandalorian season 3! Pictures and details 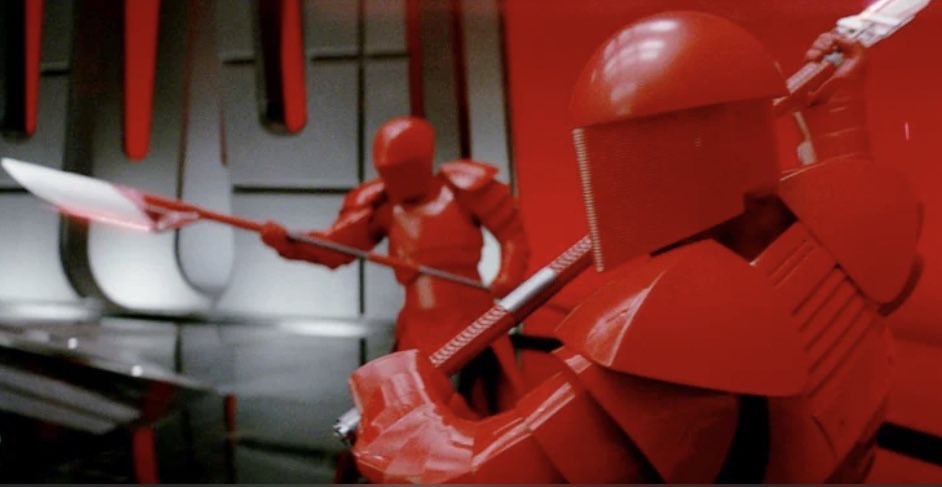 Apparent set photos from the third season of The Mandalorian hit the web today, and the most interesting of the few featured images shows some red helmets, rumoured to be linked to the Praetorian Guards.

MakingStarWars did not leak the images, but added that they were told of filming in Long Beach, California this week, and that at this location, Din Djarin was facing off against Praetorian Guards. They added that their sources told them that the Guards, rocking weapons from The Last Jedi, stood alongside red stormtroopers with Mandalorian inspired helmets. In my opinion, the helmets seen in the images above look more Mandalorian inspired than anything else.

It’s also worth noting that it was previously revealed by Dave Filoni that The Mandalorian would show the origins of the First Order, something that has strongly been hinted at, especially in the second season when we saw some botched cloning attempt that somewhat resembled Supreme Leader Snoke, and Emperor Palpatine.

Praetorian Guards appearing in the third season is definitely a surprise to be sure, but a welcome one. It also leads one to wonder who, or what, the guards are protecting and raises some questions. Are we going to see Supreme Leader Snoke? Are we going to see a possible Snoke predecessor? These are some thrilling questions, and ones I can’t wait to learn the answers to.

I’m also left wondering if these red stormtroopers are actually Mandalorian’s, and this development adds some very interesting thoughts to things I’ve seen being filmed as of late for The Mandalorian which I’ll share shortly.

Currently I’m unable to source where the images first appeared, but I personally came across them on Reddit. I’ve also heard that they originated on 4chan, but I can’t find evidence at this time. You can see the additional two images below from this latest leak.

I’ve been sitting on some news from The Mandalorian season three myself, so expect some updates from me very soon. If you want to keep up-to-date with the latest leaks, news, reputable rumours, and my exclusive reports, then be sure to sign up to my mailing list below. And if you’re a fan of my work and would like to show your appreciation, you can tip me on my Ko-Fi page here.