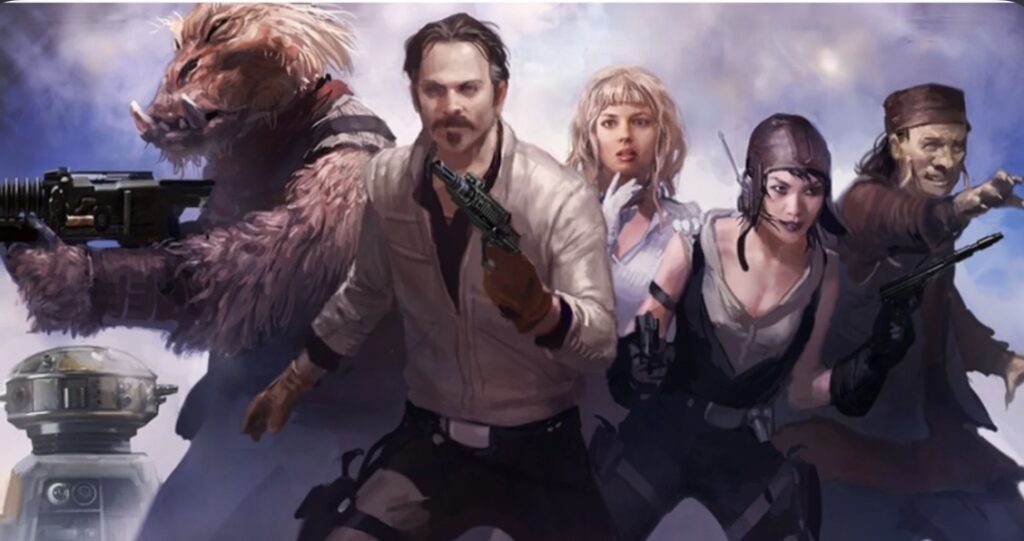 Yesterday it was reported by DualShockers that the newly announced Star Wars video game from Skydance New Media and Amy Hennig would be a revival of Hennig’s cancelled Star Wars game codenamed, Project Ragtag. Today we’re looking at what Ragtag could’ve been via a report from MakingStarWars who says he read the pitch for Ragtag along with parts of its script, saw various pieces of concept art along with being told various tidbits of information over the years which you can watch in a YouTube video directly below, or read my condescend write up further down.

The lead protagonist of the game was a fast-talking, charming, human male named Dodger Boon (played by Nolan North) who would use a pistol along with a weapon that had the hilt of a lightsaber, but had a grappling hook/whip of sorts that shot out of it. Robie Matox is a thirty something human female, and described as the Sundance to Dodger’s Butch who would act as our co-protagonist. Mattox was orphaned and raised on Level 1313, Coruscant by a crime family, she has a phobia of droids and ultimately would’ve been the lead in a sequel to Ragtag. It’s worth mentioning that much of the concept art had Natalie Morales (Parks and Recreation) as Maddox, so it was likely she was cast in the role.

The rest of the cast included an elderly male scoundrel named Buck Freeborn who had a crew for twenty years that would train children to follow his lead and is described as an intergalactic Fagin from Oliver Twist, but in his later years he secretly joined the Rebellion following the Battle of Yavin. Doc would’ve been the crews droid and is a RAN Rebel Field Medic Droid that Dodger stole. Doc is an astromech that travels on a large rolling ball and it’s dome shaped head can detach and operate independently and would fulfil a healing role within the game. Lunak is a burly alien in his fifties and acts as the mechanic within the crew who speaks in an unknown language but sports a universal translator with his body resembling that of a retired boxer, but his head sharing striking similarities to a manatee. Wil Nightstar is a longtime friend of Dodger and Buck, who’s also a dashing, charming scoundrel with a dark secret. Zanni is a force sensitive charlatan who uses the force to be a successful criminal, who Dodger detests. Korzan Sable is the main antagonist to our crew and is a fifty something year old human female who’s the leader of the Rang Clan and starts a turf war with the Hutts on Tatooine, and has secret ties to the Empire. Finally we have Oona Sable, daughter of Korzan, who’s described as spoiled, beautiful and rich who’s inner scoundrel is awoken throughout the story. Gillian Jacobs (Community) was used in concept art for Oona, possibly suggesting she was cast in the role.

The story would begin on Tatooine where we see Dodger and Robie stealing a speeder and ride to a meeting with Jabba the Hutt who senses a power play from the Rang Clan, and comes up with a plan to stop them getting a further foothold on Tatooine. Jabba tells Dodger and Robie to kidnap the daughter of the Rang Clan’s leader, Korzan Sable, in a bid to stop the Clan advancing and to possibly secure Imperial contracts. Dodger agrees to the mission as he desperately needs credits to buy his name off of an Imperial list. Dodger and Robie successfully kidnap Sable’s daughter, Oona, from an Imperial mansion and turn her over to their boss.

Dodger’s old friend and mentor, Buck, contacts the duo in an attempt to get them to take part in a mission for the Rebellion on Xibariz, a floating pleasure palace frequented by the rich and powerful owned by the Baldamiro crime family. The Rebels want the duo to listen in on a secret meeting between the Empire and Korzan Sable, but Dodger isn’t too pleased at the idea as he’s a survivor of Alderaan and blames the Rebels for putting his homeworld in crosshairs of the Empire. The conversation is cut short due to a commotion on Buck’s end, and the duo travel to Bucks location – a desert location named Mos Elrey. The team find Bucks village in disarray due to a new Imperial weapon of mass destruction being tested on the area which was created by Korzan and the Tarkin initiative. The team see purple gas fired from canastas at the remainder of the population which turns the inhabitants, including Buck, into statues, but Dodger himself does not and nor does the property and valuables of the inhabitants. This event convinces Dodger to take the mission offered to him by Buck and the Rebellion in an act of revenge.

Dodger and Robie recruit Lunak, Wil and Zanni to bust Oona out of Jabba’s prison, which they successfully do, as Dodger believes she is their ticket onto Xibariz. Dodger’s idea works, and the team manage to enter the pleasure palace with Una’s status and they traverse the location by jumping across rooftops until they reach a nightclub where they meet one of Bucks contacts, Ananda Sirena, who is a Baldamiro underboss. Sirena tips off our crew regarding the meeting place of the Imperials and Sable. Dodger manages to listen in to the meeting and learns that the gas that killed Buck is mined from the astroid graveyard of Alderaan (which is why Dodger is immune) and is fired from a weapon named the Death Blossom which Sable created. Our crew is discovered and make a break from the space station, and tell Oona she is free to go, but she is disgusted by her mothers actions and leaves with Wil.

Following a space chase, Dodger and crew crash land on a remote marsh-like planet called Oto-Phagii. Dodger and Zanni are captured by the spice addicted locals of Oto who worship an albino hutt named Mammo. The duo are set to be sacrificed to the Hutt, but they are rescued by Lunak. The group flee deeper into Oto and discover an old plantation with its sole residents being a Clone Wars era Major General named Pilaf and his Super Battle Droid companion, I-ZK. Pilaf is shocked to discover that the Clone Wars ended over twenty years ago and agrees to help stop Korzan Sable and allows our team to stock pile weapons from his armoury.

Our crew leave Oto and to meet with Oona and Wil on Bashers Yard, a small moon based salvage yard located in the mid-rim which was formally used as a sort of truck stop to Alderaan, but these days it’s used as a base of operations of sorts for Wil. Once on the planet the crew are unable to locate Oona and sense a trap with Wil and Dodger ending up in a stand-off. Wil reveals he’s the heir to the Black Sun crime syndicate, that he’s been working with Korzan the entire time and was the trigger man who killed Buck and the village civilians along with turning Oona over to her mother and destroying the intel they planned to turn over to the Rebellion. Dodger uses his lightsaber grappling hook to pull Wil towards him before killing him with a shot from his blaster.

Our crew take off to the astroid field graveyard of Alderaan which is covered in the purple gas Sable has been mining. Both the Imperials and Rang Clan are present overseeing the mining operation, with gas gathering ships and an astroid based refinery present. The crew battle Sable in space, aboard a Rang mining vessel which houses Una and the aforementioned astroid based refinery to close down the operation once and for all. Our crew manage to rescue Una, destroy the refinery and ignited the gas surroundings the Alderaan astroid field which burns it away so it can never be weaponised again in the future.