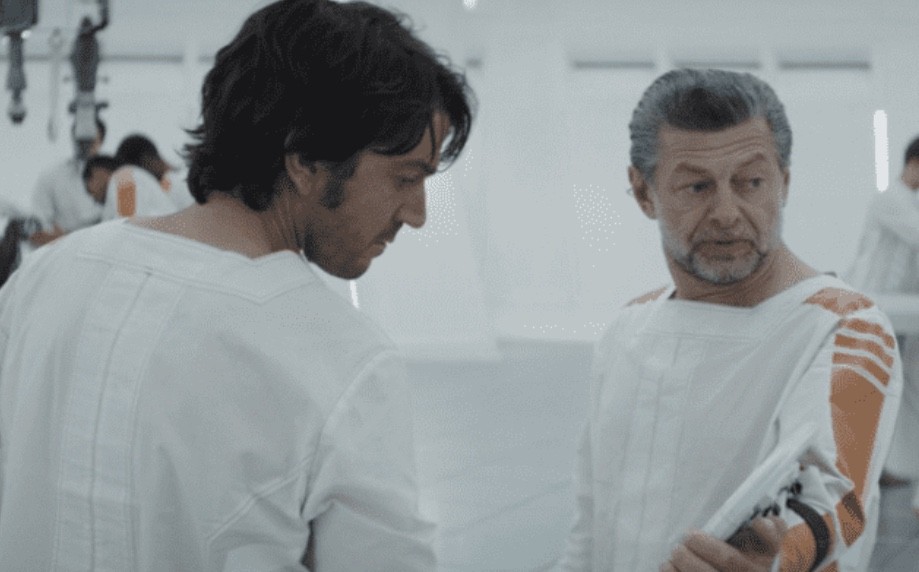 Ahead of his appearance in Andor last week, rumours of Andy Serkis appearing in the Rogue One prequel had been circulating around the internet for over a year, with the rumour originating via MakingStarWars, and it was a name I’d heard attached to the series myself a handful of months later and that Serkis was linked to prison scenes. At the time I only had a singular source informing me of this, and if you’ve been following me for a reasonable amount of time then you’d know that I don’t run an exclusive report unless I’ve got more than one source on a piece of information, but given this sources accuracy regarding other moments from Andor, I’ll reveal the additional tidbit of information that the source told me. According to my source, Kino Loy (Serkis), plays a pivotal role in a prison escape, scenes that can be spotted in Andor trailers. Loy so far seems to be happy keeping his feet on the ground and making sure the prisoners do their assigned jobs efficiently as he doesn’t have much time left on his sentence, but I’m told that Loy is a absolutely key in starting the prison escape and seems to lead his fellow prisoners.

Just how Kino, Cassian, Melshi and company escape is beyond my knowledge, but in a separate report from MakingStarWars, they’d heard that people working on the prison scenes were running through hallways covered in water, something I believe will play a part in the escape. We know that the prison is located in a large body of water which I assume comes into play somehow. However with episode nine just days away we will not have to wait much longer to have these questions answered I assume.

As we ramp up towards the end of the season, I expect it to conclude on Ferrix. It’s unclear if Cassian will return directly to Ferrix following his prison escape, but I doubt it as Diego Luna and Duncan Pow (Melshi) filmed scenes together at Cleveleys aka Niamos, the planet where Cassian was arrested. Dedra Meero has Cassian’s former lover and friend Bix Caleen in custody, Vel Sartha and Cinta Kaz are hunting down Andor on the planet, Syril has been spotted in promotional material on Ferrix wearing clothing familiar to the locals, trailers showcased the civilians of Ferrix rioting against the Empire, and a past report of mine noted that a female character of significance on the planet dies, which now looks to be Maarva Andor. Concluding the season where we started it feels natural and will encapsulate a character arc for our titular lead who at the start of the season was ripping off Ferrix locals, disappointing his adoptive mother, and only looking out for himself, but by the end he’ll assist his fellow Ferrix citizens in fighting back against the Empire, inspired hope and Rebellion within Maarva, and fights for a cause greater than himself.

The second season of Andor begins filming in the United Kingdom next month, and I hope to bring you updates on that season as I did the first soon as well as the other Star Wars productions taking place in the U.K.